The Burning of Washington

155 years ago, at around 10 o’clock on the morning of April 30, 1864, one of the most devastating events in the history of Washington, N. C. occurred. Two weeks later, much of the town lay in ruin.

The time was spring of 1864. Union forces had occupied Washington for over two years. During that period, they were successful in holding off two attempts by Confederates to retake the town. Washington at the time was very different from bustling Washington prior to the war. It had established itself as a major sea and river port serving as the hub for the exchange of crops grown on the farms and plantations lining the Tar River and the goods manufactured in the Northeast U.S. as well as the sugar and molasses produced on the islands in the Caribbean. But after two years of occupation, commerce was suffering and many of the white population had fled town. The 1860 census showed the number of occupants in Washington to be around 1,600 with roughly 45% listed as white, 45% listed as slaves, and 10% listed as free men of color. But by 1864, the number of white occupants had dwindled to less than 500. However, as a result of a large number of Union troops and the influx of former slaves seeking refuge, the overall population had swelled.

Read more: The Burning of Washington 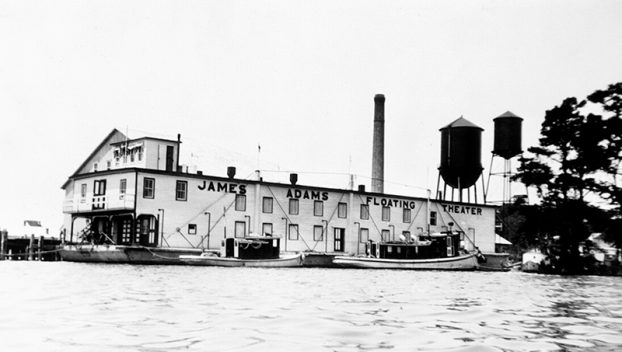 The original show boat of the Southeast, the James Adams Floating Theater, was the first and only travelling boat to bring live theater annually to ports between Baltimore and Savannah, and it continued to do so between 1914 and 1941. Edna Ferber wrote her 1926 novel “Show Boat” after visiting the James Adams Theater while it was docked in Bath, launching the “show boat phenomena” into American culture. She is believed to have traveled on the James Adams from Bath to Belhaven in April 1925, and to have first met it in Washington in late 1924, after the season had closed. Ferber’s novel, inspired in part by the James Adams, led to the 1927 “Show Boat” musical and its song “Old Man River,” and later the 1929 “Show Boat” motion picture and its 1936 and 1951 remakes.

Although Ferber’s story was about a boat named “Cotton Blossom” on the Mississippi River, and was based in part on Midwestern show boats, details in the novel undoubtedly reflect the James Adams Floating Theater, which was built in Washington. James Adams was born in 1873 in Ohio. He and his wife, Gertie, married young in Michigan and, bored with their jobs in a sawmill and a store, trained as circus aerialists. Adams’ first business venture in his early twenties was running a traveling “medicine show” selling “patent” cure-alls and potions.

During the Antebellum Period, the port of Washington, N.C. was a major shipbuilding center for North Carolina. But did you know that one of Washington’s most successful shipbuilders was a “freedman,” a former slave who had been granted his liberty by his former owner and rose to be one of Washington’s most successful businessmen? His name was Hull Anderson. Anderson’s story is one of a thriving entrepreneur but ends in the eventual abandonment of his home and business in Washington, N.C. for life in a strange country. But why would he desert Washington and take his chances in a foreign land?

November is designated American Indian Heritage month in North Carolina coinciding with Thanksgiving Day. In school, children are learning about a day of sharing and peace, about the brave early settlers, and about helpful Native Americans. These indigenous people are usually the favorite part of the history lesson. No wonder, their legacy is notable. On the short list of their Thanksgiving “gifts” to the European settlers are: corn (and the secret to roasting corn to make popcorn), beans, squash, utilizing gourds as containers, making southern Brunswick stew, and the knowledge of when and where to obtain oysters, fish, and ducks. Food for thought: The way we interpret history also changes over time, therefore America’s attitude about the Native Americans has also changed.

Your donation will help us to preserve Washington's history.